A beloved local philanthropist, passionate classical music champion, and long-time supporter of Ventura College, Miriam Emily Schwab passed away at the age of 89 on December 24, 2017. Miriam played the violin with the Ventura College Symphony Orchestra for over a decade. 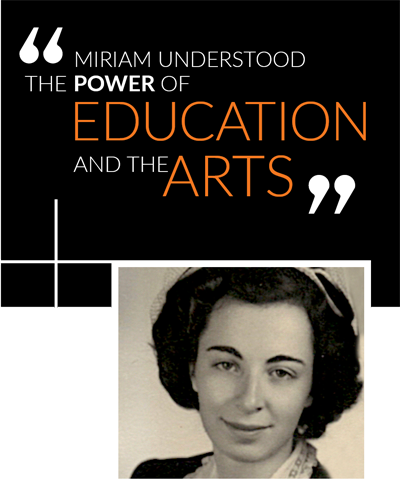 To the average outsider, Miriam may have appeared to be a feisty and frugal senior Venturan who liked to pull her own weeds and ride her bicycle through her beloved Pierpont neighborhood. Little did anyone know that unassuming Miriam would make a bequest of $12 million through her estate to Ventura College or that her donation would become the largest financial gift ever to any community college in Southern California’s history.

Miriam's bequest also funded the creation of the annual Schwab Academy of Music, which allows Ventura College to provide instruction and opportunities for beginning, intermediate, and advanced music training throughout the entire academic year.

At a time when schools across America are scaling back on or entirely eliminating music from their curriculum, Miriam's generous gift has allowed Ventura College to become one of the premier community colleges for music education in all of California. “We are grateful for Miriam for her long-time support of Ventura College,” says Ventura College Foundation Executive Director Anne Paul King. “Miriam understood the power of education and the arts. Her legacy will continue at the college for decades to come.”

Her late husband, Henry Schwab, was a decorated concert violinist and a dedicated violin and viola teacher until his death in 2006. He was a concert violinist who had begun violin study in New York at a young age.  His talent prompted his parents to send him to Europe in 1924 to continue his training.  After completing his education, he returned to the United States for a brilliant career as a concert violinist, concertmaster, and collector of instruments.  He served as concert-master of the Ventura Symphony.  He was also a dedicated violin and viola teacher who strove to instill in his students a love of classical music. 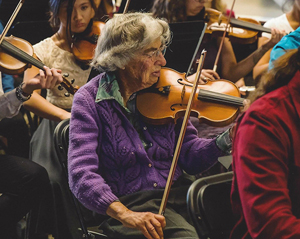 After his death, Miriam established the Henry Schwab Violin Competition. This annual event sponsors young violinists up to the age of 25, providing encouragement and financial assistance to fund their arts educations.

Ventura College Music Chair and Symphony Conductor Robert Lawson knew Henry and Miriam for decades and remembers them fondly. “they were very determined people that had a vision,” says Robert. “Miriam's passion was for students to learn instrumental music, particularly string instruments.”

If you would like to follow Miriam's example and make a difference in the lives of future Ventura College students, please contact Gerry Pantoja, Director of Major and Planned Giving at the Ventura College Foundation at 805-289-6158 or email: gpantoja@vcccd.edu .