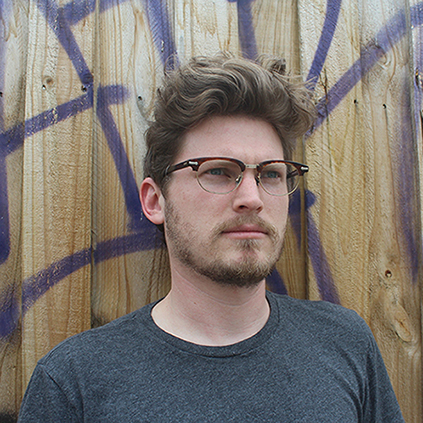 Dr. Andrew Tholl is a Los Angeles based violinist, composer, drummer, and improvisor. Hailed by the Los Angeles Times’ Mark Swed as “vigorously virtuosic,” his performances and compositions have been heard across the United States and Europe.

As a soloist and chamber musician, he is dedicated to the performance of new music and the collaborative process between composer and performer. He has premiered over two hundred new works and has worked closely with composers such as Sylvano Bussotti, David Lang, Christian Wolff, David Rosenboom, Wadada Leo Smith, Roger Reynolds, Arthur Jarvinen, Harold Budd, and George Crumb. Tholl is a member and co-founder of the “superb” (Los Angeles Times) Formalist Quartet, which has established itself as the preeminent new music string quartet of Southern California. The quartet has held residencies at Princeton University, Stanford University, University of California - San Diego, and Villa Aurora, as well as having performed in numerous festivals and concerts series including sound ON (San Diego), Reykjavik Arts Festival (Iceland), Unruly Music at University of Wisconsin (Milwaukee) and more. The group's recordings can be heard on Innova, Lakefire, Cold Blue, and Populist Records, which Andrew co-owns and operates with fellow Formalist Quartet member Andrew McIntosh. Tholl is also a member of the Los Angeles new music collective Wild Up, for which he serves as violinist, composer, and personnel manager. Wild Up has been presented by organizations such as the Los Angeles Philharmonic, National Sawdust, Ecstatic Music, American Composers Orchestra, and has collaborated with artists including Björk, John Adams, Andrew Norman, Martha Graham Dance Company, and more.

As a composer, Tholl’s interest lies in the exploration of the passage of time, the physicality of making music, noise, nostalgia, memory, and the merging of diverse musical styles. He has been commissioned by Wild Up, the New Century Players, Machine Project, Danny Holt, and more. His works have been heard at Walt Disney Concert Hall (Los Angeles), the Dartington International Summer Festival (England), Complice (Berlin), Beyond Baroque (Los Angeles), Princeton University (New Jersey), Listen/Space (New York), Gridlock (Vancouver), CNMAT (Berkeley), and the Hammer Museum (Los Angeles). In 2013 his violin concerto, Asphyxiation, was featured at REDCAT (and performed by Tholl), as part of VLN & VLA, a concert presenting new and older works for violin and viola. More recently, his adaptation of John Adams’ American Standard was described as “a refreshingly juvenile Ivesian death march” (New Music Box). Other recent activities include several performances at the 2016 Carlsbad Music Festival, a newly commissioned site specific work for The Getty Center. His work as been released on Populist Records, Bedroom Community, Cold Blue Records, and Domino Records.

Aside from his work as a “classical” musician and composer, Tholl maintains a second musical life performing pop, rock, punk, noise and improvisational music as a violinist, drummer, and guitarist.  His performing activities have included him playing with artists such as Aretha Franklin, Busta Rhymes, Zola Jesus, Scott Weiland, Diana Krall, Jóhann Jóhannsson, Max Richter, Vinny Golia, and more. Past recording contributions include string performances and arrangements for Julia Holter’s "Loud City Song," "Have You in My Wilderness," and "Aviary," as well as Ducktails’ "St. Catherine." His most recent release, CONDITIONAL TENSION, an album of improvisational work with the trio tholl/fogel/hoff, was released in 2015 by Populist Records. Additionally, Andrew has worked extensively in scoring for film, dance, and theater as both a performer and composer.

Tholl holds degrees from Arizona State University, University of Michigan, and the California Institute of the Arts. He has served on faculty at the California Institute of the Arts, and Moorpark College, and is currently teaches at UC Santa Barbara and Ventura College. He lives in Los Angeles where he continues to be involved with music for concert halls, art galleries, films, puppet shows, bars, garages, bedrooms, and coat closets.