VC’s Lester Neal headed to the CCCMBCA Hall of Fame 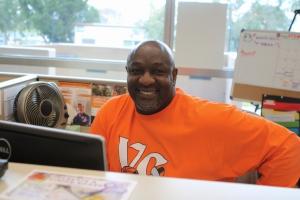 Ventura College Athletics 2008 Hall of Fame Inductee, Lester Neal, is headed to the California Community College Men’s Basketball Hall of Fame. During his time as a player at Ventura College, Neal piled up accolades such as WSC Most Valuable Player and Junior-College All-American. Neal’s passion for basketball led him to Arizona State University where he played and had an award named after him. Thereafter he went on to play professionally throughout the world. Now Neal is back as a part of the VC Pirate family as assistant basketball coach. Congratulations Lester Neal on your new hall of fame induction.